Collections API is the most popular and widely used utility API in the Java universe. With the advent of Functional Interfaces, Lambdas and Streams in Java 8, Collections API has also undergone changes to accomodate and build-upon the newly introduced functional programming features. The most widely used Collection classes and interfaces such as Iterable and Iterator, Collection, List and Map have all been enhanced in JDK 1.8 with new features and methods.

This is the 1st article in a 4 part article series in which I will cover the changes introduced in Java 8 Collections in detail.

In this part 1 of 4, I will be covering the new default method named forEach() introduced in java.lang.Iterable interface with examples. This will be followed by understanding the new default implementation of Iterator interface’s remove() method, and how it makes implementing the Iterator easier than before. 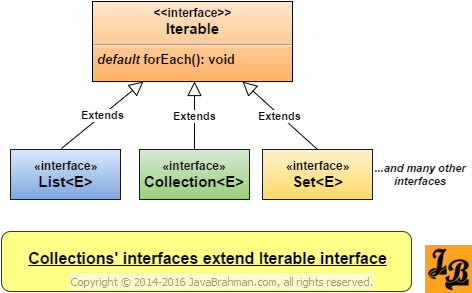 Let us now take a look at Java code showing how to use Iterable.forEach() method for consuming the elements of an Iterable collection –

New default method remove() added to Iterator interface in Java 8
Prior to Java 8, implementing Iterator interface without the support for remove() method implied that the designers had to override the method and throw an UnsupportedOperationException. Such an override was commonly done and over the years had become kind of staple in Iterator implementations not supporting the remove operation.

As you can see in the above code, the default implementation of Iterator.remove() method just throws an UnsupportedOperationException with message "remove".

Conclusion
In this tutorial we dipped our feet into the waters of Java 8 Collection Enhancements by taking a look at the changes in Iterable and Iterator interfaces.

In the forthcoming parts I will be taking you to the depths of Java 8 Collections enhancements, where I will explain the changes in important Collection classes viz. Collection, List and Map interfaces. Specifically, among the Map enhancements we will take a look at the new methods added in Java 8 which make multi-value maps handling easier than before.