This tutorial covers the basic concepts of multithreading in Java. It begins with explaining what is multithreading, and then shows how to create your first threads in Java using two basic approaches – extending Thread class and implementing Runnable interface. Both approaches are explained with Java code examples showing thread creation and execution. Lastly, the tutorial explains the reasons why ‘implementing Runnable’ approach for creating threads is preferred over ‘extending Thread’ approach.

Usually when we talk of multi-programming we refer to multiple programs running on a processor. A program is a set of instructions which when executed provides a specific functionality. An example of a commonly used program is a word processor such as MS Word. From the operating system point-of-view executing instances of programs are individual processes with each process having its own memory address space allocated to it.

As a process runs, it might need to take care of multiple internal tasks in parallel in order to deliver the complete set of functionalities which it offers. For example, as a person types in the word processor, there are multiple tasks running in the background. One task is responsible for saving changes in the document in a recovery file. Another task checks for spelling and grammatical errors as the user types. Yet another task does the basic task of displaying what a user types in the editor and so on.

All the above mentioned tasks are internal to the word processor program, i.e. they share the same memory address space which has been allocated to the word processor by the operating system. At the same time these internal tasks need to execute together or in parallel to ensure the program’s functionalities are available to its users at the same time. Each of these parallel tasks are the smallest units of independent work carried out by program, and are instances of individual threads working to make the whole program work together. 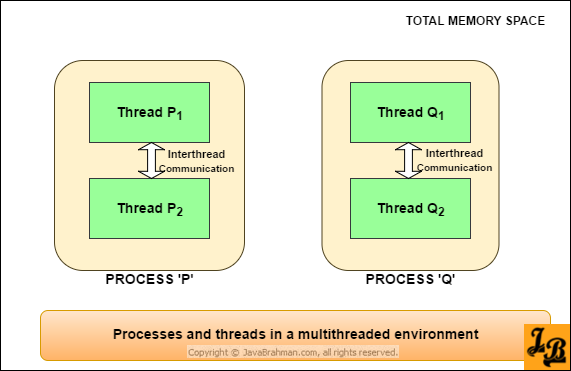 A thread in Java is the smallest unit of dispatchable code which can be executed. As the bigger program executes in a process space of its own, its multiple internal threads carry out their individual tasks and communicate with each other to make the program work as a whole. These internal threads of work use a portion of the memory address space allocated to their parent program/process. As we will see in detail in forthcoming tutorials on concurrency management, this sharing of memory space has both advantages(inter-thread communication) and disadvantages(synchronization issues).

Thread management classes in Java are all designed around management of parallel internal threads of work over their entire lifecycle – from creation to destruction. As we study basic and advanced features for multithreading in Java in this and upcoming tutorials in Java Concurrency series, we will cover all aspects related to defining, managing and optimizing threads.

To run a piece of functionality in parallel, you will need to first encapsulate it as a separate thread and then execute that thread. Let us now learn how to define and run individual thread instances as per our needs.

Creating and running a thread defined by extending Thread class
The first way of defining your own thread functionality involves sub-classing the java.lang.Thread class. An instance of Thread class holds a single thread of execution of a running program.

Let us now look at a code example showing thread creation by extending Thread class, which is followed by detailed explanation of the code –


Java example showing thread creation by extending java.lang.Thread
OUTPUT of the above code
First thread ran
Explanation of the code


Java example showing thread creation by implementing java.lang.Runnable
OUTPUT of the above code
Second thread ran
Explanation of the code

Conclusion
In this tutorial we understood the conceptual basics of multithreading, and then learnt how to create and run threads using Thread class and Runnable interface with code examples. We also looked at the preferred way of creating threads and understood the reasons for the preference. In the next tutorial, i.e. 2nd partClick to Read Tutorial on Java Threads’ Lifecycle of Java Concurrency Series, we will go through the lifecycle of a thread, and understand thread state transitions.