Introduction:This tutorial covers all aspects related to cloning in Java. It starts off with defining cloning, which is followed by understanding the classes and methods using which cloning is accomplished. We will then take up a real example of cloning wherein we will create a shallow copy using super.clone() method. Next, we will look at the inherent disadvantage of shallow copies, which will be followed by understanding the concept of deep copying by extending the shallow copying example code to create deep copies of the cloned object.

What is Cloning
Cloning an object refers to creating a copy of the object. Given an object, if you want to create multiple objects which are ‘exact’ copies of that object, but do not want to go through the process of defining a new object instance, then cloning is what you will do.

Creating clones of objects rather than instantiating and populating objects from scratch everytime is a design decision. Prototype pattern, from the Gang of Four Pattern Design Patterns set, looks at the motivations and scenarios where cloning can be applied. If you are interesting in learning the design aspects regarding when-to-clone then you can refer the Prototype Design PatternClick to Read in-depth tutorial on Prototype Pattern tutorial.

Classes involved in cloning in Java 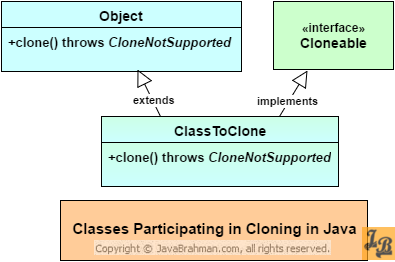 To clone a class’s object in Java, 3 actors(2 classes and 1 interface) need to work together. Let us understand the role played by each.
Object.java: java.lang.Object is the parent of all classes in Java. The reason why it plays a part in cloning is because the actual cloning logic is written in an overriden method clone() which is originally defined in Object class.

ClassToClone.java: ClassToClone is the class whose objects we plan to clone. ClassToClone has to implement Cloneable, and it has to override Object’s clone() method with the overriding logic, in order to facilitate cloning of its objects.

What is a marker interface?
A marker interface is an empty interface i.e. it doesn’t contain any methods. Its purpose is to indicate to the Java runtime regarding a specific role which will be played by any class implementing it. Examples of commonly used marker interfaces include Serializable, Cloneable etc.

Creating Clones with super.clone(), i.e Creating Shallow Copies
One of the most common and straightforward way of creating clones is by invoking super.clone() from inside the overriden clone() method of the class you are trying to clone. This directly invokes the Object’s clone() method and clones the object’s content into a new object.

Let us now see the super.clone() method in action to understand its working. Let us take a class Employee with 2 attributes name and age. Now let us create an instance of Employee and then clone it using super.clone() as shown next –

Explanation of the code

Problem with Shallow Copies
We saw above how to create a clone of an object using super.clone() method after implementing Cloneable and overriding Object.clone() method. We were succesfully able to clone the emp object to empClone.

However, there is a problem with the cloning done above. To understand the problem, let us add the following code to the end of main() method of CloningInJava class, i.e. after we clone emp object. 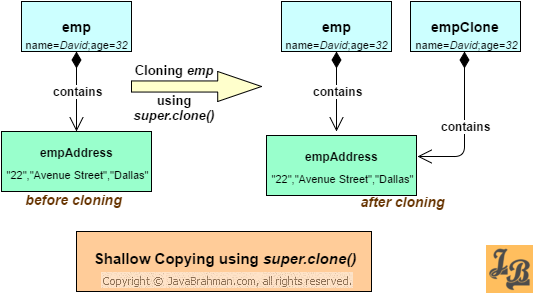 As you can see in the above diagram, while empClone creates a copy of the primitive attributes, i.e. name and age, it conveniently “re-uses” the same empAddress object for empClone. This is what is known as a Shallow Copy i.e. a copy/clone in which the primitive values are cloned but the object references still point to the references of the original object.

Drawback of Shallow Copying
Shallow Copies have a significant drawback. As we saw above, after cloning emp and empClone point to the same empAddress object reference. If after cloning we decide to change the address for empClone, then the same address change will also reflect in the original emp object. This is an unwanted behaviour/side effect, as what we really want and two separate clones of Employee class with their entire object hierarchies cloned.

This requirement of ours, of having completely independent/separate object clones, brings us to our next topic – Deep Copying.

Deep Copying
Deep copying clones not just the ‘shallow’ primitive values, it also creates copies of the nested object hirerarchy inside the object being cloned. A clone of an Employee object created using deep copying would then look like this – 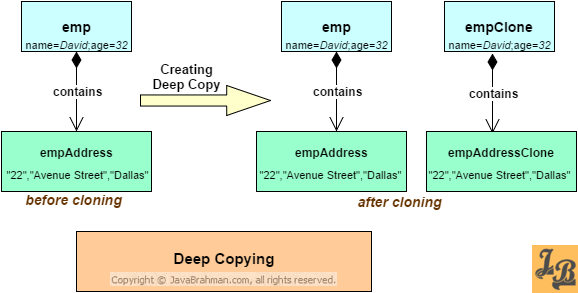 As you can see in the above diagram, emp and empClone have their own instances of empAddress. Any change done to emp’s empAddress will not have any affect on empClone’s empAddress and vice-a-versa.

To implement deep copying – Employee will still need to implement Cloneable, and it will still override Object.clone() method. But inside the overridden clone() method, instead of calling super.clone(), a clone of an Employee object is constructed step-by-step using custom code as shown in the code below –

Explanation of the code

Summary
In the above tutorial, we understood what is cloning in Java, saw the main classes and interfaces participating in cloning with an explanation of each of their roles, and then learned how to make shallow copies and deep copies with Java code examples, and their detailed explanation.

3798 Subscribers and Counting...
All original content on these pages is fingerprinted and certified by Digiprove