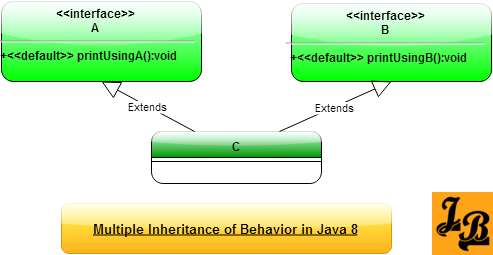 In the above class diagram –


Java 8 code showing multiple inheritance for interfaces A,B & class C
OUTPUT of the above code
Print from A
Print from B
Explanation of the code

Conflict Resolution in case of inheriting methods with same signature
We just saw above how C inherits implemented default methods from interfaces A & B. The two inherited methods had different names so there was no confusion. But what if the default methods being inherited had the same signatures – same name and same return types. Java 8 provides resolution rules for this.