Converting an array of data into an equivalent List does seem like one of the simplest tasks which a programmer would do when coding in Java. Thinking on the same lines I set out to write a simple and short corsding tip on array to list conversion, but in the process discovered so much underlying subtext/knowledge about the 3 primary options to do so that I decided to write a full-fledged full length post on the topic. In case you need a list of quick suggestions with examples on ways to convert an array to a list(or arraylist) then you can just read the code snippets which are self-explanatory. Else, do read on to understand the interesting bit of technical information around these array to list conversion options, which has several good-to-know technical nuggets interspersed throughout.

There are many scenarios where data is present in an Array, while you need to store it in a List or, in List’s more specific subclass, an ArrayList. There are more than one commonly used ways in which an Array can be converted to a List or ArrayList. Each of these methods come with their own limitations. This tutorial analyzes the three most commonly used options along with their limitations and applicability.


Converting array to List using Arrays.asList()
OUTPUT of the above code
[1, 66, 88, 100, 201]
As you can see in the output, members of integerList have been copied from integerArray. This is what we wanted to do as well.

However, there are couple of limitations with the above instance of List<Integer>. Let us tackle these limitations one at a time. To start with, let us add the a new line to the above code which adds another number to integerList as shown below –


Adding a number to integerList after it is created

Now running the above code, which tries to add an element to integerList, throws the following exception –

What could have gone wrong with the above code? It was converted to a List correctly. The List elements were also printed correctly. Then why is UnsupportedOperationException thrown when we try to add an element to the List? 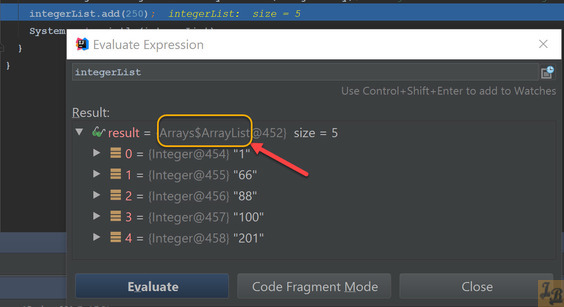 The next logical question is – why does the add() operation on Arrays$ArrayList instance throw an UnsupportedOperationException?

Limitation 2 of using List instance returned by Arrays.asList() method
Any changes done to the original array, integerArray in our example, will reflect in the List instance, integerList, even if the changes are done in the array after the list was created. Let us see a code snippet showing the effect of this limitation –

Second limitation of using Arrays.asList()
OUTPUT of the above code
[1, 66, 88, 100, 201][22, 66, 88, 100, 201]
As you can see in the above code and output, the value of integerArray[0] was changed in the above code after the integerList was created. This change reflected in the integerList as well. This is because, the Arrays$ArrayList instance internally stores a reference to the array passed to it at the time of initialization, and uses the original array itself to store data. Hence, any change done to the original array is automatically propagated to the Arrays$ArrayList instance created out of it.

So, the second consideration to take when using Arrays.asList() method is to accept that given any change to the original array, the generated list will also change.

Let us now look at the other options available to us for converting an array to a List.

Option 2: Using ArrayList constructor with Arrays.asList() as parameter
We can use the constructor of an ArrayList which accepts a collection as an input parameter and initializes a new java.util.ArrayList instance containing the collection’s data. An ArrayList created in this manner does not have the twin disadvantages we saw in option 1 viz. being of fixed size, and being just another view into the original array rather than being an ArrayList instance on its own.

This method is good but not perfect. The limitation with this option is that it works only with arrays of Object/Class types and not with primitives such as int or long. This is because a List cannot be of a primitive type, and due to the same reason Arrays.asList() method also does not accept a primitive array as its input. This limitation when converting arrays of primitive types to lists, now takes us to the third way for creating a list from a given array.

Converting array to List using Arrays.stream() and a Collector
OUTPUT of the above code
[1, 11, 111, 1111, 10000][2, 22, 222, 2222, 20000]
In the above code, arrays of both primitive and Object types are converted to streams of their respective types first. The individual Streams are then fed, or pipelinedClick to Read tutorial explaining concept of Pipelines in Computing, to a Collector instance which accepts the Stream as input and ‘collects’ its elements into a List which is of the same type as the type of the original array.

Summary
In this tutorial we had an in-depth look at the 3 popularly used ways of converting a given array into an equivalent arraylist. We looked at how to code for each of these options, understood their applicability and went through their limitations